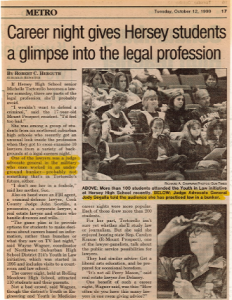 She was among a group of students from six northwest suburban high schools who recently got an unusual look inside the profession when they got to cross-examine 10 lawyers from a variety of backgrounds at a legal careers night.

One of the lawyers was a judge advocate general in the military who once worked in an underground bunker–probably not something that’s in Tortorello’s future either.

Also on hand were an FBI agent, a criminal-defense lawyer, Cook County Judge John Scotillo, a prosecutor, a corporate lawyer, a real estate lawyer and others who handle divorces and wills.

“The game plan is to provide options for students to make decisions about careers based on information rather than hunches or what they saw on TV last night,” said Wayne Wagner, coordinator of Northwest Suburban High School District 214’s Youth in Law Initiative, which was started in 1995 and includes visits to a courtroom and law school.

Not a bad crowd, said Wagner, though the district’s Youth in Engineering and Youth in Medicine career nights were more popular. Each of those drew more than 200 students.

For her party, Tortorello isn’t sure yet whether she’ll study law or journalism. But she said she enjoyed hearing state Rep. Carolyn Krause (R-Mount Prospect), one of the lawyer panelists, talk about the public services possibilities for lawyers.

They had similar advice: Get a liberal arts education and be prepared for occasional boredom.

One benefit of such a career night, Wagner said, was this: “How often do you have this many lawyers in one room giving advice?”