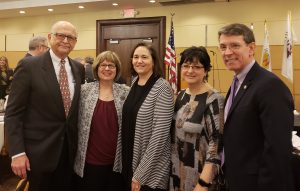 Good morning. It is really a pleasure to be here with all of you. Do you all get up this early normally? I certainly don’t. I am thinking of asking Mayor Hayes if we could have a Prayer Lunch next year, something a little more civilized!

George and I were asked to speak this morning. No outline given, no guidelines…just speak. So, after our 11th revised edition, what you hear this morning is the best we knew to do. I am going to start and then George will speak on his particular journey and the influence of prayer and grace on his life over the years.

Grace is defined by some as “unmerited favor” (an act of kindness). Merriam Webster also defines it as unmerited divine assistance given to humans for regeneration or sanctification. In retrospect to me, the moments I identify as grace-filled always presented me with opportunities and/or choices. Some easy, some difficult. But for sure, both George and I would recognize the incredible impact of choices that both sets of our parents made on our lives before we were even born. Choices of education, marriage, service to our countries and the choice of the path of Christianity. All of these had profound impacts on us as we continued into adulthood. The grace offered and resulting choices our parents made resound in our lives yet today.

I believe that God has a path for us to follow. That path can result in joy, pain, sorrow, growth, health, sickness, highs and lows. But ultimately as we keep walking the path, it is God’s plan for our growth and development and it is for our own welfare. We can deny it, we can fight it, but it is ultimately trying to lead us to the destination he has planned for us.

We all have those quiet moments (or perhaps some not so quiet) where new thought and ideas give birth. 53 years ago, at Augustana College, I was tapped on my shoulder and asked to dance…you got it–George. Now I could have said “I don’t dance” or something, but the choice I made at that moment has lead to 50 years of marriage, 3 children and 12 grandchildren. About 20 years ago now, I was out walking by a neighbor’s house. She was sitting on her front porch reading a book. Well, actually, she was studying. She had decided to go back to school to earn her Master’s Degree. That idea percolated in my head for quite some time. I was currently doing speech therapy in some of the subsidized housing buildings in Arlington Heights after being asked by Village Nurse Helen Jensen. Okay, here it is…School/No School. Choice. I made a choice! I finished my Master’s Degree in Gerontology and was pleasantly working at Park Place Senior Center when George came home one night and talked about meeting Marie Payes, then the Administrator of Community Services at the Lutheran Home. Here it comes again! Choice. Being comfortable/risk. I loved working there every day! 12 years later I was the director of Hearthstone Assisted Living and we were making some life changes like moving into a condo and oops! Choice! I decided to retire. In 2008, totally out of the blue, I realized I was using my phone on my left ear instead of my normal right ear. A small though made me mention it to my doctor and shortly after, I was diagnosed with a benign brain tumor. Grace? I had never experienced a significant health issue, and yes I consider it a blessing. Retirement lasted about 2 weeks before I began as the Director of Senior Ministry at 1st Presbyterian Church of Arlington Heights. I always enjoyed working with people of age when WHAM…I started to be convinced that George and I needed to do something for children. Why you say? Good question. All I know is it was another Choice! We went through DCFS training and for 11 years we have been hosting infants at our home…now 47 precious lives have crossed over our threshold…waiting for 48.

Along with choices like these then we face risk, success, change, failure and more and with these emotions came my need to ask for strength, comfort, forgiveness, solace, etc. Enter Prayer (well hopefully I have been praying all along.” But Prayer helps us to work through answers that are difficult, to guide our way in choices, to give us comfort of forgiveness. Prayer allows us to give thanks for our great blessings. Prayer is where I go when I am frustrated, angry, overjoyed, confused, peaceful. Prayer is a place I like to be! That is pretty much it. Grace equals choices equals prayer. This is the path my life has followed, and I am so grateful. George has had an incredible journey, and he will share some of that with you now.

We’ll certainly want to move things along-since I know many of you will want to get to your radios to hear Reverend Colin Smith on “Unlocking the Bible” which starts shortly after 9:00am on WMBI 90.1.

Now to my part, understanding Grace and how it leads to prayer?

Life is a journey with many stops and starts…twists and turns and the unexpected. The way I try to explain this is from a story in the book written in 1880 by Lew Wallace, called Ben Hur: A Tale of the Christ. He tells the story about the Jewish Prince, Judah Ben Hur, who was captured, taken as a slave by the Romans and imprisoned on a galley. The prince, apparently doomed and hopeless as a slave chained to his oars, rowing to the drums of his Roman masters.

In an ensuing battle with pirates, the galley is rammed by an enemy ship and starts to sink. Coincidentally, Ben Hur’s chains are unlocked, allowing him to escape from the sinking galley. He proceeds to rescue the unconscious Roman fleet commander from drowning.

Later Ben Hur finds Christ and becomes his follower, using his saved life and riches to touch the lives of others.

I think many of us can relate to our own circumstances of running into dead ends and feeling hopeless only to find ways, with the help of others, out of those circumstances and then to do something beyond what we think we can do.

Here is some version of my story.

I was born in Brno, Morovia, the land of Jan Hus, Sigmund Freud and Gustav Mahler, in what is now the Czech Republic. I was baptized as a Roman Catholic. My paternal grandfather was Lutheran and my paternal grandmother was Jewish. By 1940, when my parents married in Brno’s Catholic Cathedral, the Nazis controlled the country. In the 40s, a lot of family drama played out under the Nazis. It was a matter of survival for my Dad who could be considered a Jew under the Nazi’s Nuremberg Laws.

Then the post-war period had it’s challenges as well. There was the communist takeover of the country in February, 1948. My Dad, who was a lawyer and an anti-communist had within weeks after the Putsch fled and arranged an escape of my brother and mother.

I was left behind to be cared for by my grandmothers since I was too young to walk out of the country. Eventually, I was smuggled out in 1950 to be reunited with my family in Linz, Austria, in the protected American Zone. My “smuggler” Jewish Grandmother and an uncle were imprisoned for this act.

We lived in Innsbruck, where my Dad worked for Church World Service, until we received the news that President Harry S. Truman signed an Executive Order to allow the Drosts to come to America as “Displaced Persons.” DPs if you will.

We are not refugees. We did not have any expectation of returning to the old country.

Coming to America, we were sponsored by the Ravenswood Presbyterian Church in Chicago. There the assimilation process began. Like all “green horns” we needed to learn the ropes, to develop the language skills, get work and housing.

My parents decided to settle in a non-ethnic neighborhood, pretty much working class, with good schools. My mom cleaned houses, often taking me along, and my Dad worked in factories, eventually becoming the office manager of St. Paul’s Church in Chicago which had German speakers in the congregation. My Dad was fluent in German, so it was a good fit.

The St. Paul’s Church Council supported and helped my Dad to enroll in the John Marshall Law School to eventually practice law again in our adopted country.

Growing up, I often wondered about my true ethnicity. Recently, I took a DNA test to discover more about my roots. Wondering about my Jewish, European connections or are there any traces of some Asian or African DNA? Nope. Results came back over 58 percent Neanderthal. My kids found this pretty humorous until they figured out they weren’t adopted.

Finally, I arrived at Augustana College in Rock Island, Illinois to meet the person who would become the lovely Mrs. Drost.

At Augustana, we were “forced” (in my mind) to take courses in religion and attend daily compulsory chapel services. With the student population deeply engrossed in sixties thinking and questioning the need for mandatory chapel attendance, the dean would say, ” Chapel is not compulsory, but required for graduation.”

My time in college helped me to reach outside of my comfort zone, making choices as an adult that know are the right and good thing instead of focusing on my comfort, things such as joining in the efforts at

-Going on a mission trip to Ghana to dig a well and build a church.

-Traveling to Cuba to deliver medical supplies for a local synagogue and choosing to assist in an asylum matter.

My dad often reflected on being a survivor and not a victim. Victims expect compensation for their losses and survivors are just grateful to be given a second or third change–grace indeed.

My father-in-law used to ask us at the dinner table–“What did you do for humanity today?” What have we done to make the world a better place?

First “Be still…hear God’s quiet voice giving us the opportunity to choose good over evil, love over hate and action over inaction…This is grace indeed. The next step is gratitude through prayer knowing that God has given us the Grace to choose to follow his will and be an active witness in his presence whether it is in Africa, Cuba, Europe, North Lawndale or in Arlington Heights.

We thank you for this opportunity to speak today. This year, George and I celebrate 50 years of marriage. We have made this journey together and are so incredibly grateful. We would like to leave you with the tagline from our church, First Presbyterian, because it expresses our feelings so well: Choose love, and be the light so you can change the world. Thank you.